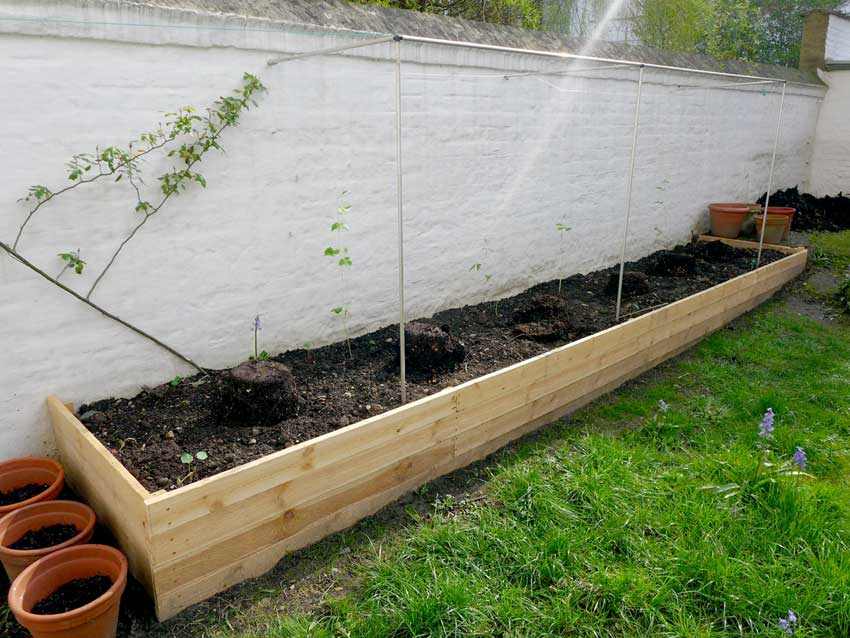 Raised garden beds produce significantly larger yields than traditional beds. They can be situated on the ground or on solid surfaces such as pathways or flat roof areas. They can be free standing in the open or build adjacent to a wall (3 sided) to provide better frame support.

A 12″ deep bed provides ample room for most vegetable roots. Almost any type of vegetable can be grown in raised beds. 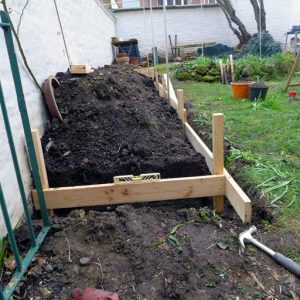 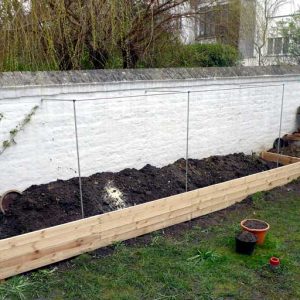 A raised bed boosts drainage which is essential for good plant growth, particularly in wet climates or with heavy soils. A raised bed can be used to introduce a different soil type to the garden and are a good answer where existing soil may be polluted or heavily compacted.

Besides improving drainage, a raised bed increases soil temperature in the spring assisting young plants get started. As raised beds have a bigger soil volume than containers they are much easier to manage with watering, retaining a higher general moisture content. 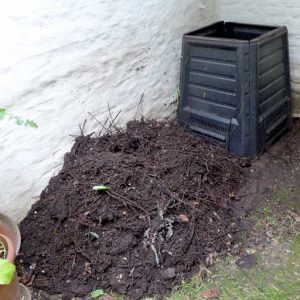 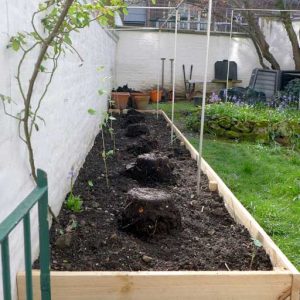 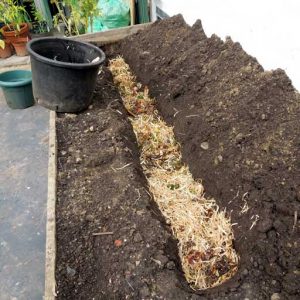 Filling a raised bed with good topsoil enriched with composted organic matter creates ideal root zone conditions. A general rule of thumb for filling beds is 1/3 organic matter to 2/3 soil. During use, soil can be liberally supplemented with other organic amendments, creating a rich and organically active root zone that nurtures plants.

A raised bed can reduce water use by 1/3rd compared to a normal vegetable bed. They are ideal for modern irrigation systems and control systems such as solar pumps, irrigation timers and sub-surface soaker hose or surface drip irrigation systems. Plants in raised beds can suffer more quickly and more severely from drought due to improved drainage, so careful thought has to be given to irrigation. 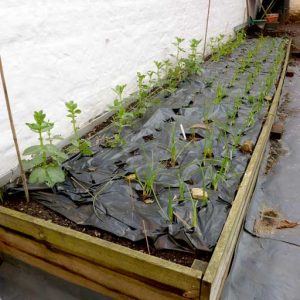 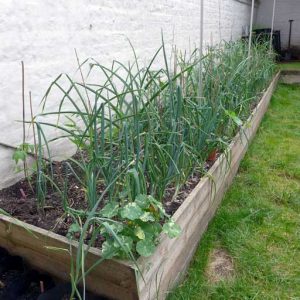 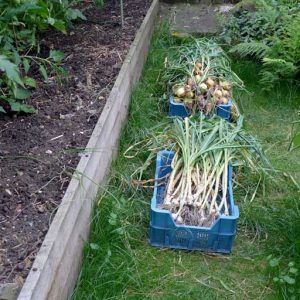 Ideally, when situating a raised bed choose a location that gets at least six hours of direct sunlight each day. Generally a bed should be no wider than arm’s reach, or around 3 feet/1 metre wide. If located on a patio, deck or driveway, keep soil from washing out by installing a liner inside the raised bed frame. Most liners feature a polypropylene fabric that lets water drain while keeping soil in place.

When constructing a raised bed on a grass surface retain any turf removed in making the bed and bury it later in the lower levels of the bed. This will enrich the soil as it decays. Soak newspaper and cardboard in water and then lay it in the bottom of the garden bed. This keeps weeds and grass at bay. 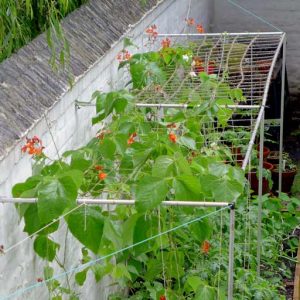 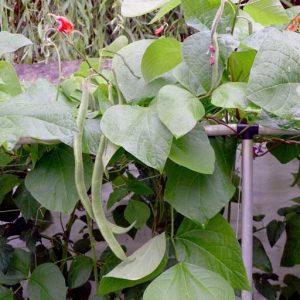 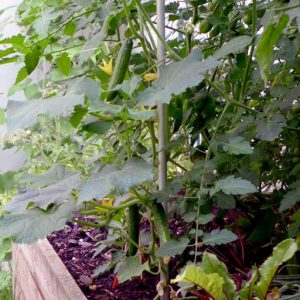 At the deepest level a layer of twigs, shredded brush cuttings and prunings will trap air for the plants’ roots. To fill the bed use a sheet-compost approach by adding organic material layer by layer such as grass clippings, kitchen waste, wood ashes, sawdust, leaves and rotted manure before covering them with finishing layers of compost and new top soil. The aim in this process is to encourage bacterial action in the bed.

When building raised beds on top of hard surfaces, ensure a depth of at least 45cm (18in), but ideally 60cm (2ft), so that plants can root deeply. 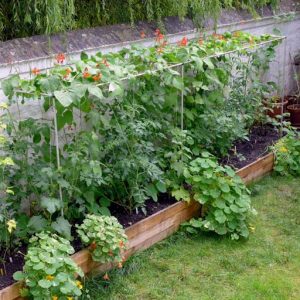 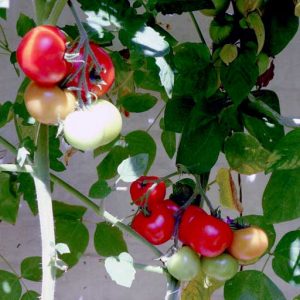 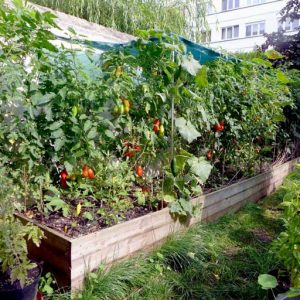 The main benefit of a raised bed system is the loose soil structure created which provides an increased capacity to hold oxygen and water and should result in plants that are noticeably bigger, healthier and more productive.
As soil compaction adversely affects nearly all physical, chemical and biological properties and functions of soil, raised beds should not be walked upon.

When constructing a raised bed it is important to consider later additions that may be added. A solid raised bed frame can work as a suitable foundation for cold frame construction or a lightweight greenhouse system. Aluminium tube framing can be added later to create elevational space for crops or to protect plants with netting. Using the elevational space of a raised bed greatly increases the planting opportunity. 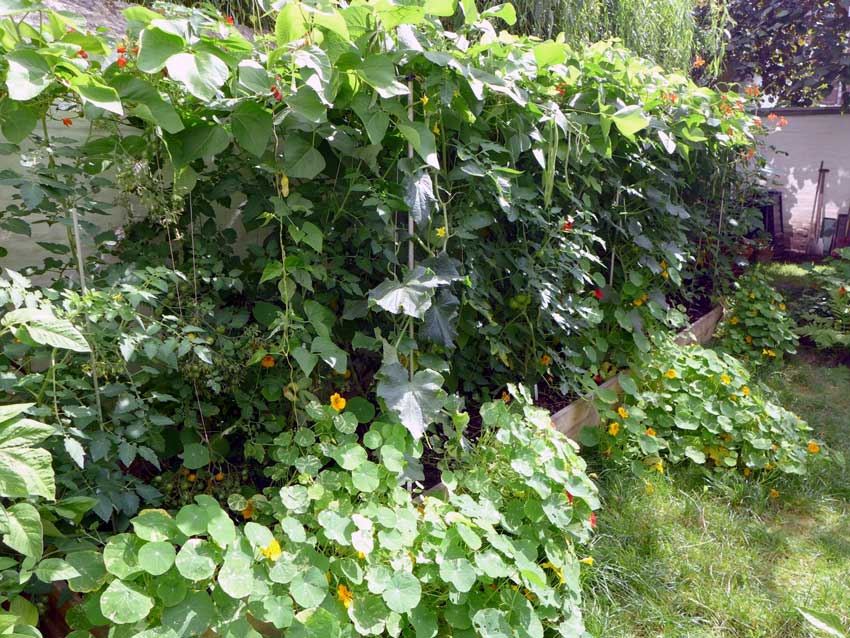