People who grow tomatoes all know about tomato blight. Each year, just as the tomato plants reach maturity and the main fruit has set, the tomato blight arrives and the plants begin to die. Learning about this disease is a must for tomato growers.

Put simply, blight is a fungal infection. There are several competing arguments on what causes the disease. Some researchers say that soil which is nutrient-deficient provides the ideal breeding ground for blight. Others say that a lack of lime in the soil is the problem. In recent years increasing numbers of professional gardeners have come to insist that the fungus is bred by heavy rain fall, mixed with humidity and certain soil conditions.

Late blight, as it is known, is caused by the Phytophthora infestans fungus and affects both tomatoes and potatoes. It is especially virulent if the weather is unusually cool and wet. Late blight was the fungus that caused the Irish Potato famine.

While many professional gardeners now reserve tomato growing for the greenhouse under glass, some organic producers and those interested in the natural resilience of heirloom varieties have continued to persevere with outdoor growing. Some varieties of heirloom tomato have a natural resistance to blight which when combined with developed soil treatments and alternative planting procedures, can produce quite successful results. 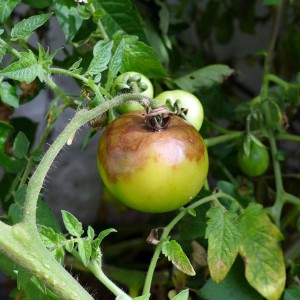 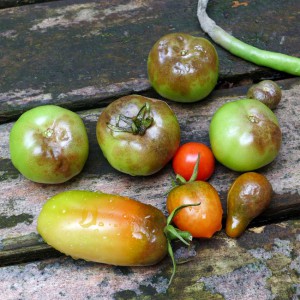 Growing tomatoes outdoor in a Brussels summer can be difficult. Doing so in a heavily shaded garden with limited exposure and an inclination towards dampness is not ideal. However, working between varieties of tomato, combining these with complimentary other species, beans and cucumbers, and providing the right structured growing environment can result in losses some years being reduced to below 10%.

Phytophthora infestans is not strictly a fungus or a bacterium or a virus. It belongs to a group of organisms called “protists” which are commonly referred to as “fungi”. They are also called “water moulds” because they thrive and produce spores under humid, moist conditions and cause infection only when excess moisture is present on the plants.

Late blight comes with a particular downfall of rain which occurs at the end of summer around August/September each year. It is noticeable by the heavy volume of the downfall after a prolonged period of dry weather. In particular, when the heavy downpour follows a period of hot clammy weather and results in a cool sharp chill in the 24 hours following, this is very indicative of the blight’s arrival.

Late blight on tomatoes is identified by black/brown lesions that appear on leaves and stems which expand rapidly – matter of days – across the plant. The entire plant can be destroyed in a few days after the first lesions are observed. The blight produce dark brown, firm lesions on tomato fruits which enlarge and destroy the entire fruit. Lesions on tomato fruit are often followed by soft rot and disintegration.

Strategies for addressing late blight start with the soil. A well drained and well fed active growing bed ensures plants are strong and healthy. Ensuring air flow in and around plants and keeping the soil bed surface dry prevents excess moisture accumulating on plants. Avoiding leaf litter around the base of plants helps to remove infection habitat.

While staking and framing tomatoes up from the ground is normal, combining beans, cucumbers and other climbers which are not affected by blight, and which produce additional leaf cover, does provide some umbrella protection to tomatoes. For example, tomatoes planted under a tree canopy in one part of a garden will grow quite successfully while others elsewhere in the garden are affected by blight. However, a balance is required to regulate light access and allow air movement. 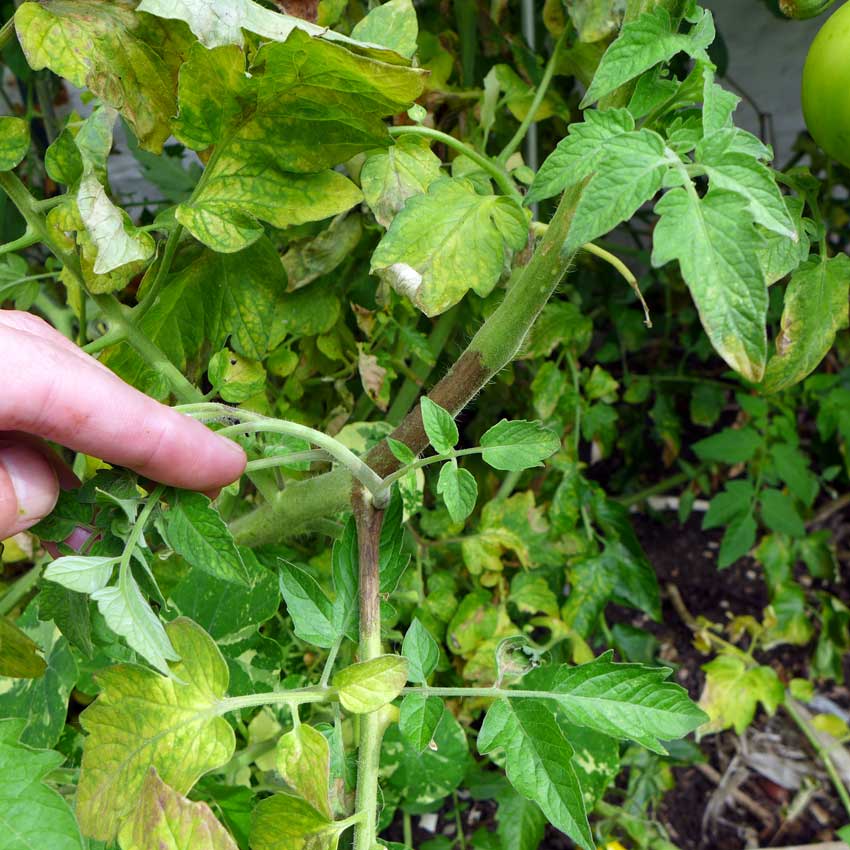 Tomatoes planted in containers can benefit from reduced soil moisture content and when positioned by walls are offered some protection from weather while still enjoying open air flow. In this respect growing tomatoes in containers has some advantages over soil beds.

Using good heirloom varieties of tomato, mixing varieties and grouping them in clusters to individual areas in the garden can produce quite interesting results in understanding the progression of the disease. Varieties that fail in one spot one year can produce quite successfully in another area the following year.

Working with vertical support structures, even string to walls, and combining tomatoes with other climbers for protection can be surprisingly successful and see good crops of mixed tomatoes. Diversity in the range of tomato types does restrict the progression of blight which can sweep very quickly through a single type crop.

Late blight can be considered one of the plant diseases affected by climate change. The breakdown in patterns of normal spring to summer to autumn weather with excessive temperatures and unseasonal changes are causing a range of problems in plant production worldwide, not unlike late blight. It is interesting to examine how alternative organic production methods can address these problems.