I (Anne) have learned to love my little Edinburgh garden over the recent years of my retirement. Half of it is given over to vegetables, grown in slightly raised beds – I dug out the existing turf to make that possible. The other half is shrubs and flowers, most if which I inherited with the garden. The soil is rubbish, literally. Very heavy clay for about six inches, then masses of stones and rubble. I think there has been a stone building over the wall in the past, and when it was demolished much of the stonework was tipped into my garden. So the raised beds are a necessity, and the whole garden is in constant need of fertiliser – usually I buy organic manure from a local supplier. 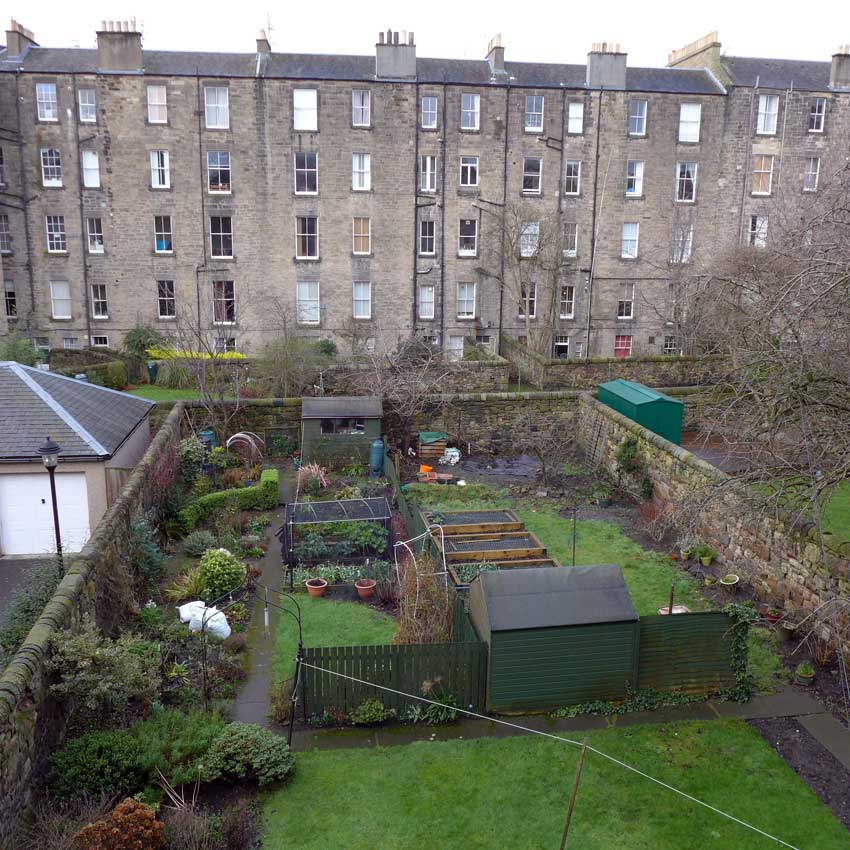 View of garden situated in Edinburgh

I grow anything I can. Potatoes of all sorts (they love Scotland). Leeks – as you can see, they too are happy here, but don’t grow to any size. Small but perfectly formed, I would say. Root crops like beetroot, carrots and parsnips. Courgettes are hit and miss, depending on what sort of summer we have. This year they quietly drowned. Then anything green I can manage; runner beans, broad beans, French beans (though they never do that well), chard of all colours, spinach, kale like Pentland Brig, Nero di Toscana and Red Winter. Anything really that is labelled ‘hardy’ in the catalogue, and that looks good too. And tastes good, of course. 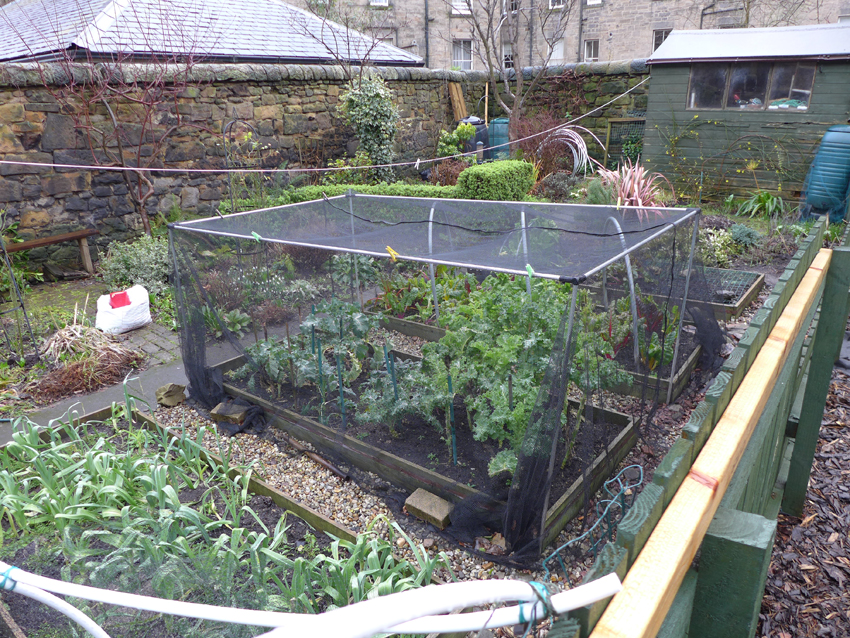 I also have three little apple trees, all Scottish varieties. Raspberries, tayberries, loganberries and blackcurrants, which traditionally do well here. 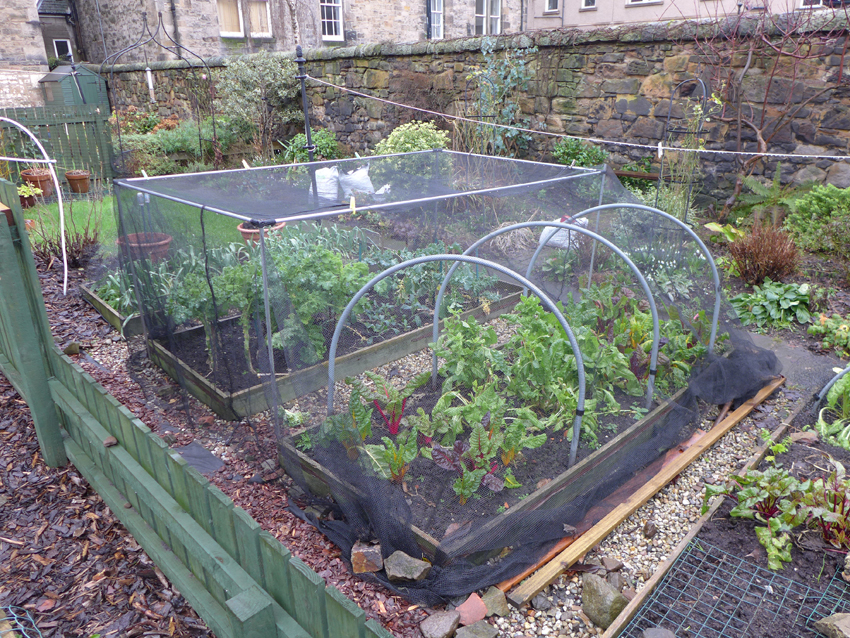 Throughout the year I seem to support a fair amount of wildlife. Squirrels (grey) and cats are a nightmare, digging their way through bulbs and any bare earth they can find. Squirrels even ate their way through the shed door this winter. Slugs and snails abound because of the stone walls and the potentially wet summers. Flocks of pigeons and sparrows enjoy the brassicas and the spinaches, and the blackbirds, given half a chance, will demolish the soft fruit. So everything is netted, as you can see from the photos. It does seem to work, though it’s not visually appealing. 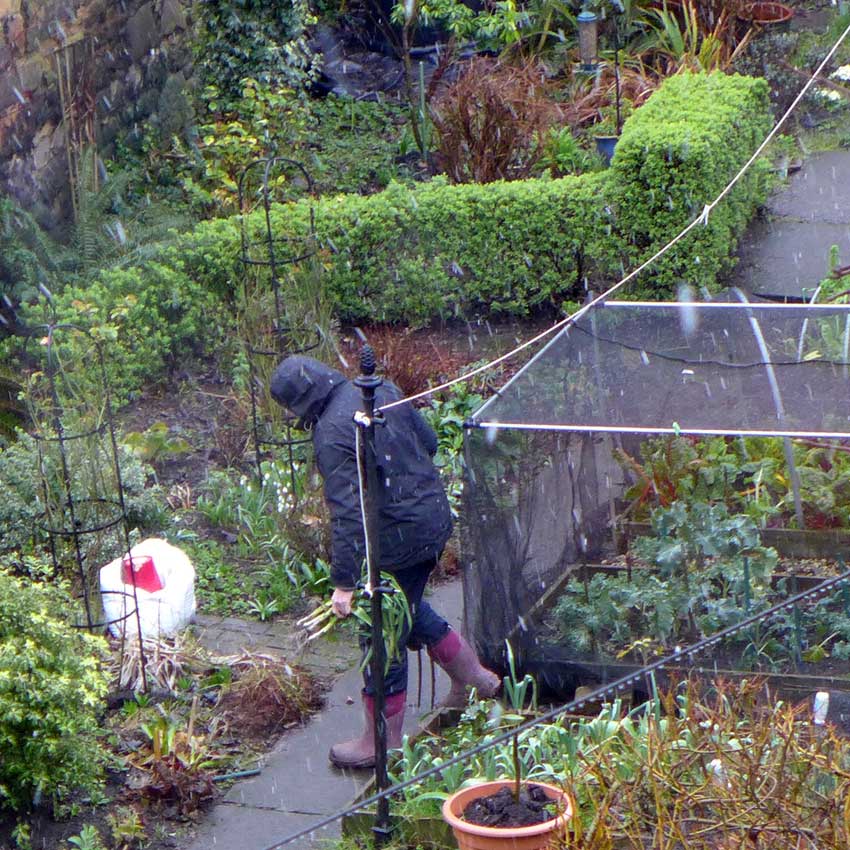 Anne in her garden

It’s all crammed in to a pretty small space, and I love it dearly!